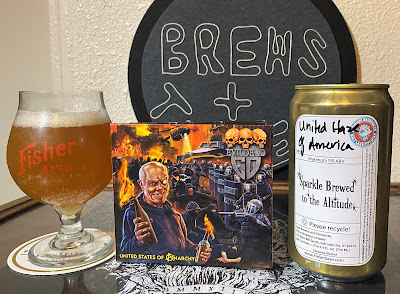 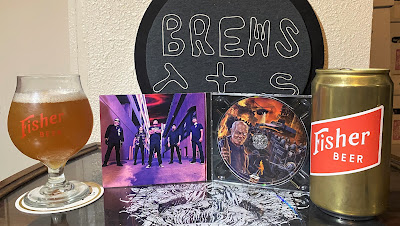 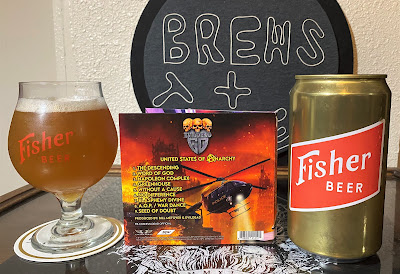 Good evening and hails metal maniacs!  Your drinking buddy the Meista here tonight with a killer pairing of Evildead's kick-ass "United States Of Anarchy" and a tasty United Haze Of America Pale Ale, the latest offering from my good friends at Fisher Brewing Company!

Album Info:
Brew Info:
Overall Pairing: The United Haze Of America is a very tasty, juicy, and crushable brew... a perfect companion to the thrashing intensity that is the mighty Evildead!  And what better way to crush 32 ounces of tastiness than with a night of intense headbanging to the kick-ass tracks on "United States Of Anarchy"!  'Nuff said!
Cheers and hails!!
And if you haven't done so already, check out my interview with Evildead drummer Rob Alaniz here: https://youtu.be/geo86sqEm9E
Posted by The Meista at 2:21 PM No comments: 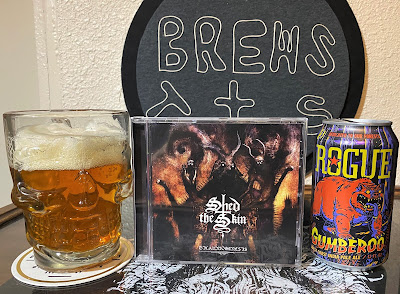 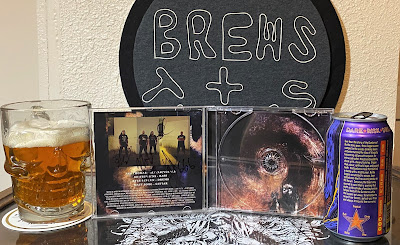 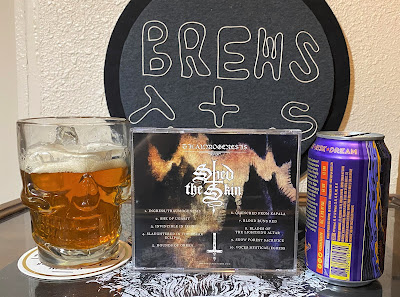 Overall pairing: Rogue's Gumberoo's bold and intricate flavors and aromas go so great with the aggression and intensity of "Thaumogenesis"!  The fiery and soaring guitar work of Sorg and Thomas shines even brighter with the sweeter notes of the brew, while that bitter punch is right in line with the guttural vocals of Thomas and the sweet and hearty malt backbone is great for Severn's thunderous drumming and Stephens' intricate bass work!

Posted by The Meista at 9:41 AM No comments: 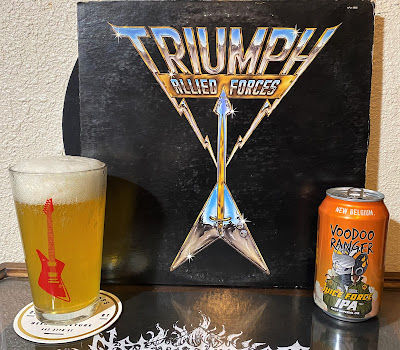 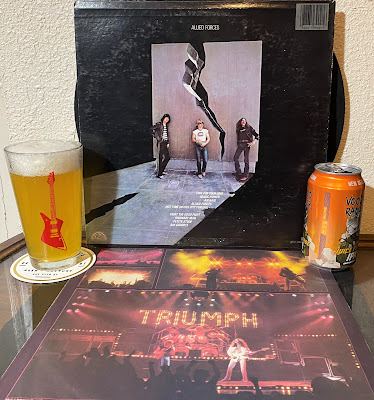 Hey there rockers, rollers, and hoppy beer lovers!  Your pal the Meista here rocking out to another great find from my friends at Lavender Vinyl in Ogden, Utah and a tasty brew... how's 'bout some "Allied Forces" from Canadian rockers Triumph and a Voodoo Ranger Juice Force IPA from New Belgium Brewing Company?!  Oh yeah!

Overall pairing: The punchy and hoppy elements of Voodoo Ranger Juice Force IPA is great for the true rockin' goodness that is Triumph's "Allied Forces"!  Those bright, citrusy notes really go great with the power, intensity, and beauty that is found on every single track of this underappreciated and very influential album!

Posted by The Meista at 6:35 AM No comments:

August 1st, 2022 - "[Their] Story So Far": An Interview With Lorenzo Testa & Silvano Ancellotti Of Uncle Bard & The Dirty Bastards 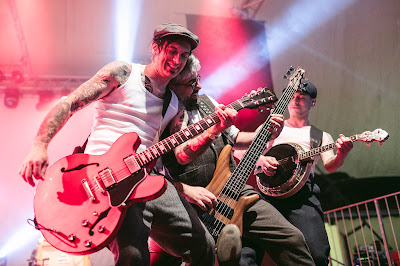 Hello there rockers and rollers!  Your favorite hard rockin' drinkin' buddy the Meista here with another killer interview for you!  I recently had the great pleasure of chatting with the incredibly friendly and incredibly talented Lorenzo Testa (banjo and mandolin) and Silvano Ancellotti (guitars) of Celtic rock band Uncle Bard & The Dirty Bastards!  Hell yeah!  Here's a link to that video in its entirety:  https://youtu.be/svBvf5-tvNk

Enjoy!!
Make sure to check out Uncle Bard & The Dirty Bastards at:
Cin Cin!!  Sláinte!!
*Photo by Filippo De Dionigi
**Special thanks to Jamie Winters for designing the Brews and Tunes logo, to Jerry Howard for creating the Brews and Tunes intro video and to DiseNgaged for the use of their song "The Real Me" (copyright 2020)
Posted by The Meista at 7:06 AM No comments: 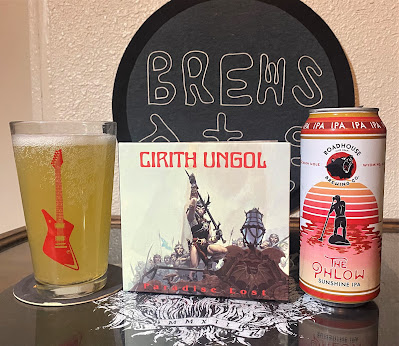 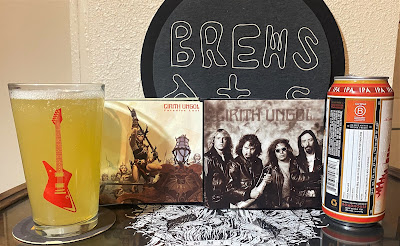 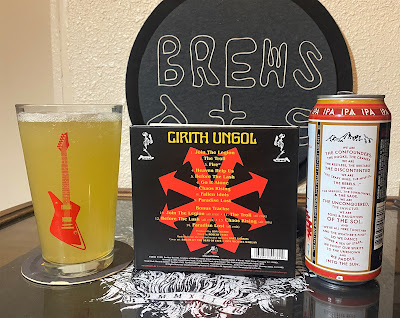 Album Info:
Brew Info:
Overall pairing: The Phlow Sunshine IPA is a punchy, yet very drinkable, crushable, and refreshingly crisp brew... great for pairing with the very underrated metal power that is Cirith Ungol!  The complex tropical fruit and citrus flavor of the beer aligns perfectly with the depth and heavy metal purity of the wonderful tracks on "Paradise Lost"!
Cheers and hails!!
And if haven't done so already, check out my interview with Cirith Ungol guitarist Jim Barraza: https://youtu.be/PZim_qal3Mo
Posted by The Meista at 9:48 AM No comments: 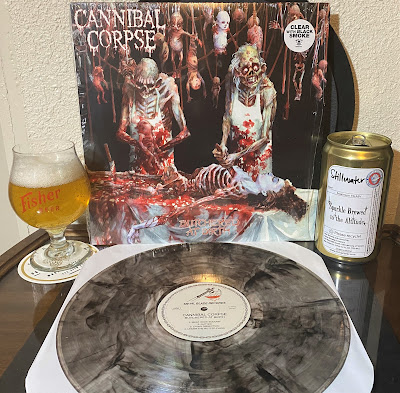 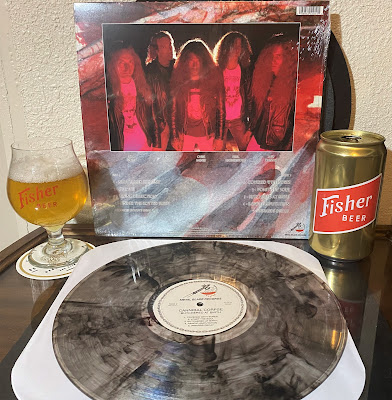 Hello and happy Friday evil-doers and craft brew swillers!  The Meista here getting heavy and aggressive with "Butchered At Birth", the classic sophomore album by Cannibal Corpse and Stillwater Pale Ale from the fine folks at Fisher Brewing Company!

Overall pairing: The Fisher Stillwater Pale Ale is very crushable and wonderfully hoppy American Pale Ale sure to get you all charged up for the pit!  And that my friends is exactly the kind of beer you want when blasting the highly intense, powerfully brutal aggression that is the mighty Cannibal Corpse!  'Nuff said!

If you haven't done so already, check out my interview with Cannibal Corpse drummer Paul Mazurkiewicz: https://youtu.be/dGAKbzTKq50

Posted by The Meista at 9:18 AM No comments: 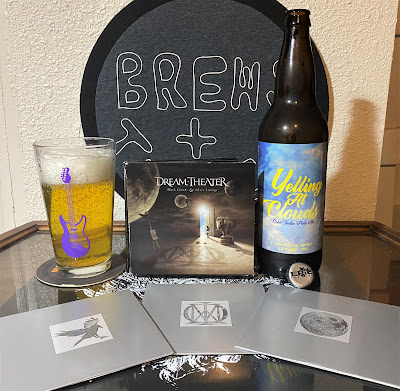 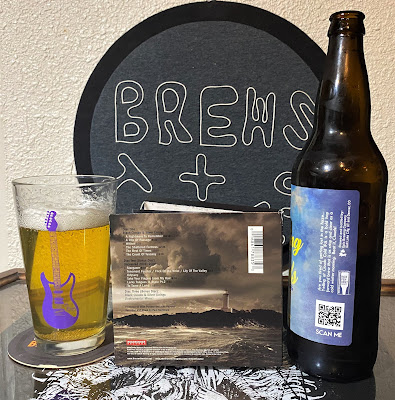 Overall pairing: Epic's Yelling At Clouds IPA is a drinkable, yet somewhat punchy and flavorful brew... a good companion to the might and depth that is Dream Theater!  Those citrusy hoppy notes go great with the intricate guitar work and bass work, while the crackery elements and slightly bitter bite go great with the more aggressive passages!

Posted by The Meista at 5:58 AM No comments: